At Netherton Infant School we follow the ‘Cumbria Agreed Syllabus for Religious Education.”

For the majority of sessions, children will study the Christianity religion.  As well as this, children will explore different religions in some units and compare this to Christianity.  They will learn about daily life in these religions such as special food and clothing as well as how and why events are celebrated.

Click here for the KS1 RE Curriculum.
Please see 'Understanding the World' within Development Matters for EYFS links. 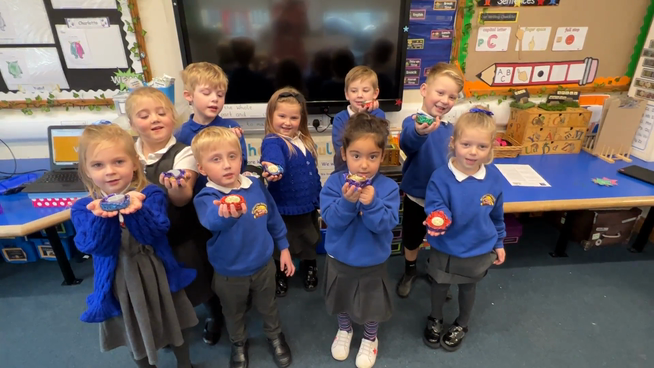 Why we teach RE

RE is key to helping young people grow up in today’s multi-faith, diverse and connected world. RE aims to give pupils opportunities to develop their knowledge and understanding of religion and beliefs and to contribute to the development of their own beliefs and values.

RE seeks to develop pupils’ awareness of themselves. RE has an important role in preparing pupils for adult life, employment and lifelong learning. It assists them to flourish individually within their communities and as citizens in a diverse society and global community. It enables pupils to appreciate their own and others’ beliefs and their impact on individuals and societies. Pupils are encouraged to reflect on their own self-worth and uniqueness as human beings. RE plays a key role in the promotion of spiritual, moral, social and cultural development in schools.

RE contributes to the spiritual development of pupils by:

• understanding the importance of feelings, emotions and experiences in religious belief and practice;

• considering the value, purpose and dignity of human beings;

• reflecting on who and what matters in life in order to develop their own views and ideas on religious and spiritual issues;

• considering how religions and beliefs express key ideas and experiences;

RE contributes to the moral development of pupils by:

• reflecting on key values and ethics within religions and beliefs;

• reflecting on what is of ultimate value to pupils and believers through studying the key beliefs and teachings from religion and philosophy on values and ethical codes of practice;

RE contributes to the social development of pupils by:

• studying a range of social issues from religious perspectives, recognising diversity of viewpoint within and between religions, as well as common ground between them;

• reflecting on how religions and beliefs lead to particular actions and concerns.

RE contributes to the cultural development of pupils by:

• promoting cultural understanding from a religious perspective through encounters with people, literature, the arts and resources from differing cultures;

• considering the relationship between religion and cultures and how religious beliefs contribute to cultural identity and practices;

• promoting inter-cultural understanding by encouraging pupils to question their own cultural pre-suppositions.

Concepts that support the teaching of British values regularly occur in RE.

Democracy: Through discussion in RE pupils can realise the significance of each person’s ideas and experiences. In debating the fundamental questions of life, pupils learn to respect a range of perspectives. This contributes to learning about democracy - as does examining the concept of responsibility to share our voice and influence for the well- being of others.

The rule of law: In RE, pupils examine different examples of codes for human life, including commandments, rules or precepts offered by different religious communities. They can consider the value of the rule of law, where all people are equal before the law.

Individual liberty: In RE, pupils consider questions about identity, belonging and diversity, learning what it means to live free from constraints. Within RE, pupils can develop an understanding of themselves as situated in a particular cultural context by considering the cultural norms, rules, desires and pressures which restrain them, but also by considering the ways that they are free.

Mutual Tolerance: Learning about different ways of life and beliefs requires an understanding of difference. Quality RE teaching helps pupils to move beyond tolerance towards an increasing respect and the celebration of diversity. This should include hosting visitors and paying visits to places of worship and places of religious or spiritual significance.

Respectful attitudes: In the RE curriculum, mutual respect between those of different beliefs is developed, promoting an understanding of what society gains from diversity. Recognition and celebration of human diversity can flourish where pupils understand different faiths and beliefs, and are actively encouraged to be broad-minded and open hearted. Pupils should learn to disagree respectfully and teachers should challenge their choice of language when necessary.

The excellent teaching of RE will help pupils discuss in depth and learn to think for themselves about British Values.